Sam, Ha-Yeon and Aislinn handing over their cheque for $208 to Danielle, an SPCA staff member...

The money was raised through planning and running a bake sale last term and they hope that the money will be spent on food, shelter and toys for some of the animals the SPCA protects and cares for.

The picture below is from the visit of the new elective group this term to the SPCA animal hospital and shelter in Newtown last Friday. The group spent an hour at the shelter, taking a tour and finding out more about the SPCA cares for the animals. The picture was taken when most of the group took up the SPCA's offer of viewing surgery on a rabbit - very exciting!

During our elective this term students have formed three project groups, with two groups looking to raise further funds to help the SPCA in their endeavours to protect animals around the Wellington region, and the third group looking to raise awareness of how to care for animals by finding out more about animals themselves. Sam, Ha-Yeon, Oliver and Aislinn are leading and supporting these groups. The group will run an SPCA fundraising day on Friday 3rd June, with a mufti day and student disco at lunchtime, and a bake sale at 3pm. More details to follow. 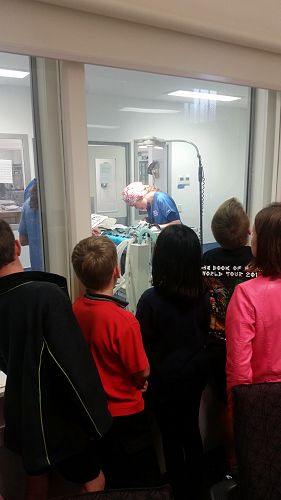